For the past 40 years, inflation in the western world has not triggered any emotion…until now. Naturally, the question we must ask is: What exactly has caused the sudden panic, fear, and obsession with the subject of inflation?

In central banks’ pursuit of taming inflation, we have seen the blunt instrument of raising interest rates being applied worldwide. This has negatively impacted most asset classes, especially property and shares.

Since 1990, the general trajectory of interest rates has been downward, ultimately reaching the floor of a 0.1% p.a. official cash rate in Australia. In other words, “free money”. This led to an unprecedented demand for almost any time type of asset that can store wealth.

It is no surprise that with the onset of rate hikes, as well as wild predictions of the share market and property market falling in excess of 60% and 30%, respectively, all types of investors have their eyes and ears fixated on what will happen next in the global economy.

On the topic of interest rates, it must be noted that if rates are raised too quickly, they could trigger a recession. On the other hand, if inflation is unchecked this could lead to deeper and damaging recessions worldwide. A consequence of this is social unrest, thereby eroding financial equality and harmony, meaning it may take decades to return to normality. 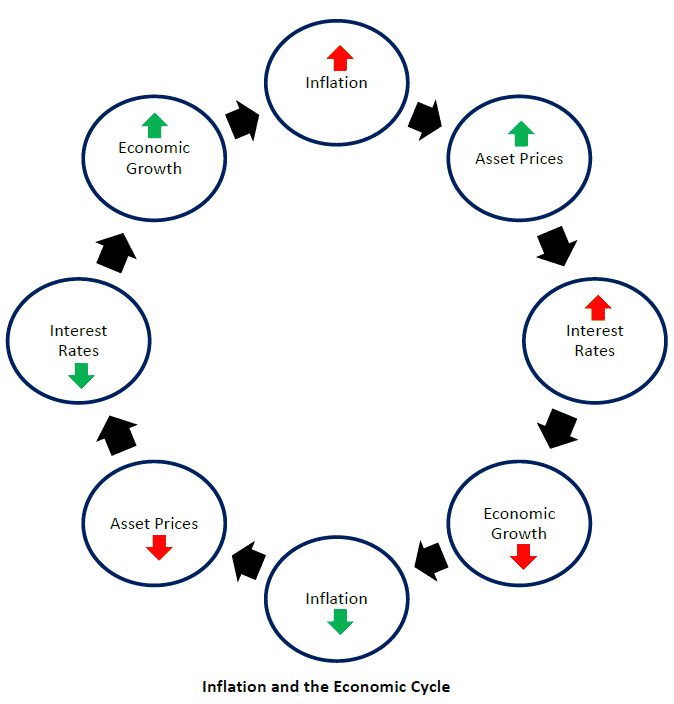 Ronald Reagan famously said during his term as US President in the 80s: “Inflation is as violent as a mugger, as frightening as an armed robber, and as deadly as a hit man.”

This is undoubtedly the most pressing economic issue of our time.

To understand the origins of inflation and to arrive at possible antidotes, one needs to dust off their economics textbooks from an era that experienced this phenomenon first hand – the 70s.1

As one of my favourite sayings goes – “History doesn’t repeat itself, but it often rhymes.”

What is the True Origin of Inflation?

There is probably no one wiser on the subject matter of inflation than the late Milton Friedman. Friedman is one of the most highly regarded economists of modern times, reinforced by his receiving of the 1976 Nobel Memorial Prize in Economics for his work on the study of inflation. He is the principal architect of modern monetary policies applied by western central banks.

The words Friedman uttered during his era are all the more relevant to today’s economic climate. As he put so simply: “Inflation is a monetary phenomenon. It is made and stopped by central banks.”

In other words, it is the volume of money being printed, which can be economically summarised as an increase in the money supply, that is relevant to the question of inflation.

1) Increase in the money supply.

Since the onset of COVID, the increase in money supply has never been more significant in our economic history. We have been paid a raft of various government benefits to sit at home and disrupt normal business and spending habits. At the same time, the RBA increased the money supply to counterbalance the loss of productivity. Central banks were essentially “printing more money” at a rapid pace, while lowering interest rates and allowing the bank to issue more credit.

Also, let us not forget quantitative easing, where the government buys and issues debt, reducing the cost of capital and creating massive liquidity in the financial markets. The size and magnitude of these monetary actions are seven times larger than during the GFC.

According to Friedman, once a rapid increase in money supply occurs, it takes anywhere between 6 to 18 months for inflation to work through the economy. We are seeing this phenomenon first hand here in Australia and around the world, with inflation rates not seen since the 70s.

Friedman also noted that inflation is not a global phenomenon but a home-grown problem that is caused by central banks and can be remedied by central banks. An analogy used by Milton is that an increased money supply is like giving someone alcohol. At first, the positive effects are noticed and everyone seems to be happy…however, an excessive amount will always lead to an inflation hangover.

2) Supply/Demand for Goods and Services

Counterintuitively, these disruptions do not cause persistent inflation. From the onset of COVID, the stop-and-start nature of the global economy has resulted in supply chain issues and overnight demand for certain services, with employers needing to re-skill and re-tool their businesses to cope with unexpectedly high demand.

Once again, using free-market logic, these issues will eventually resolve themselves over time. Economists often refer to these impacts being ‘transitionary’ impacts of inflation; that is, temporary.

Looking back at the ’70s inflation crisis, many governments around the globe tried to lay blame on the 1973 war in the Middle east that disrupted oil production and increased its price by as much as 400%.3 Drawing comparisons to today, there are numerous adverse economic and social impacts due to the war in Eastern Europe. This includes effects to both supply chains and commodity prices around the globe.

Despite this, the teachings of Milton Freidman tell us that these supply shocks provide short-term inflationary pressure. In the long-term, free-market economics will find a way to adjust the demand and supply of these goods, meaning that supply issues are not the true culprits in adding to long-term inflation – it is all about the RBA’s monetary policies.

Perhaps the most ignored and least discussed aspect of inflation is future price expectations. Perhaps it is because we have not experienced this first hand for the past 40 years and are accustomed to a low level of historical inflation. Thus, our expectations can be said to be well-anchored.

To read Msquared Capital’s full article on inflation, click below to download the full report and find out whether or not the inflation genie has escaped the bottle.

The information contained on this website should be used as general information only. It does not take into account the particular circumstances, investment objectives and needs for investment of any investor, or purport to be comprehensive or constitute investment advice and should not be relied upon as such. You should consult a financial adviser to help you form your own opinion of the information, and on whether the information is suitable for your individual needs and aims as an investor. You should consult appropriate professional advisers on any legal, stamp duty, taxation and accounting implications of making an investment.

The information is believed to be accurate at the time of compilation and is provided by Msquared in good faith. Neither Msquared nor any other company in the Msquared Group, nor the directors and officers of Msquared make any representation or warranty as to the quality, accuracy, reliability, timeliness or completeness of material on this website. Except in so far as liability under any statute cannot be excluded, Msquared, its directors, employees and consultants do not accept any liability (whether arising in contract, tort, negligence or otherwise) for any error or omission in the material or for any loss or damage (whether direct, indirect, consequential or otherwise) suffered by the recipient of the information or any other person. The information on this website is subject to change, and the issuer is not responsible for providing updated information to any person. The information on this website is not intended to be and does not constitute a disclosure document as those terms are defined in the Corporations Act 2001 (Cth). It does not constitute an offer for the issue sale or purchase of any securities or any recommendation in relation to investing in any asset.

Investors should consider the Fund’s Constitution, Information Memorandum (IM) and relevant Loan Memorandum (disclosure documents) containing details of investment opportunities before making any decision to acquire, continue to hold or dispose of units in the Fund. You should particularly consider the Risks section of the Information Memorandum and relevant Loan Memorandum. Anyone wishing to invest in a Msquared Contributory Mortgage Income Fund will need to complete an Application Form. A copy of the IM and related Application Form may be obtained from our office via email request from [email protected]

Past performance is not indicative of future performance. No company in the Msquared Group guarantees the performance of any Msquared fund or the return of an investor’s capital or any specific rate of return. Investments in the Fund’s products are not bank deposits and are not government guaranteed. Total returns shown for Msquared Contributory Mortgage Income Fund have been calculated net of fees and any distribution forecasts are subject to risks outlined in the disclosure documents and distributions may vary in the future. All figures and amounts displayed in this email are in Australian dollars. All asset values are historical figures based on our most recent valuations.

The information found on this website may not be copied, reproduced, distributed or disseminated to any other person without the express prior approval of Msquared.

Enjoy the control and flexibilty that comes with managing your own super.